A little dice micro-game to throw into your RPG session...

A player rolls the dice associated with their choice of squid catching equipment:

...and checks it against the target number: the number of squid available (2d6).

If they beat the target number they capture that many squid with bonuses for doubles and trebles.

If they get lower than the target number they've tried to catch too many squid and they lose a squid pot (if they had one).

Suggested number of rounds for a night's fishing: 3

Bit of a Gamble

I've included the odds from AnyDice above as it's a bit of a gamble as to which equipment the players choose...

There's ~72% chance that there will be 8 or fewer squid available and ~31% chance of 7 or 8 squid so a net on its own is a reasonably solid bet with ~44% chance of capturing 7 or 8 but they don't have the chance of catching any bonus squid.

A net & a squid pot has the benefit of a doubling bonus and gives ~56% chance of capturing 7 or more but if they lose the squid pot that drops to 25%.

3 squid pots gives ~69% chance of capturing 7 or more squid and they have the doubling/trebling bonus available but those odds drop very rapidly each time they lose another pot: 2 pots have a ~19% of capturing 7 or 8, 1 pot obviously has no chance of getting above 4.

Originally this was a little side game I made for a one shot set in Dolmenwood where the players go squid fishing on Lake Longmere before the adventure catches up with them.

There's not really such a thing as a squid pot but there are squid traps which are a bit like lobster pots. I like the sound of a squid pot.

It's been adapted to this business card sized design for 2021's Pleasure-not-Business Card RPG Jam.

Support this game at or above a special price point to receive something exclusive.

An actual flat piece of cardboard with a nice soft finish delivered through your door in an envelope of some kind.

If you want more than one just chuck a few extra pence on top and let me know how many.

International will go by Royal Mail International Standard; UK by 2nd Class.
VAT added by Itch will be refunded (it's included in the price).
UK orders are ~£1 cheaper to send so will refund that too. 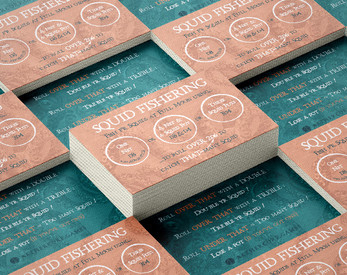 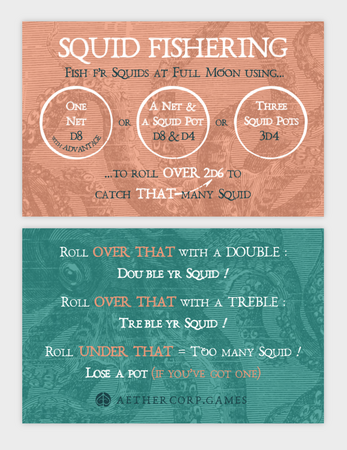 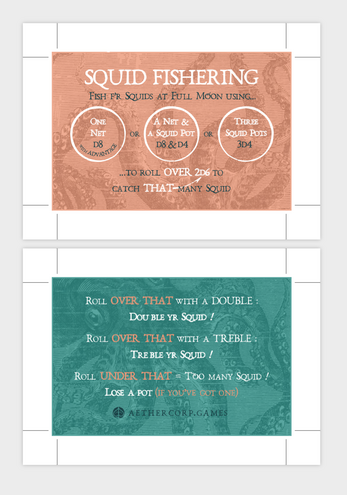